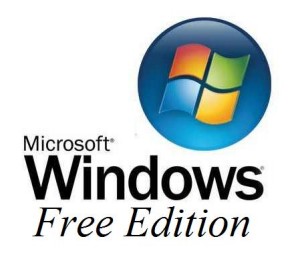 In a scenario that several years ago was difficult to imagine, Microsoft is offering its most popular brand – the Windows operating system – free on mobile devices under 9 inches. This is primarily in response to its negligible smart phone market share and inability to compete with Apple and Android. The fascinating corollary question is – how long will it take before the iconic Windows brand will be completely free on the desktop as well?

On the desktop landscape, Microsoft has long reigned king. Windows has had almost unanimous adoption as the business desktop platform of choice, and the user base has mostly transmuted their work OS preference to their personal computers. With the difficulties in setting up a Linux operating system, most home users would prefer to simply deal with Windows than spend the tens of hours necessary to fight with drivers, invalid installation prerequisites, and the other problems that plague Linux clients.

On the mobile battlefield, however, Microsoft has not fared so well. Apple has dominated the scene with its elegant design and functionality, while Android has been gaining market share with its inexpensive operating system and malleability. RIM / Blackberry, once the crown jewel of business phones, has almost completely lost relevance, as consumers have taken control of the market.

The Microsoft decision to offer Windows Mobile for free is smart – not just from the perspective of increased branding and device interoperability with its desktop counterparts. App Stores have proven extremely lucrative, and Microsoft has all but missed out on the action. As these online retail compendiums become more central in the deployment and marketing of software, it will be a significant loss if Microsoft can’t bring its App Store to relevance.

And with corollary businesses such as servers, support, search, and the Office productivity suite all depending on user adoption of its Windows operating system, it will be interesting to see if Microsoft will be forced to offer its desktop OS for free as well. Even though Linux is currently difficult to use, it will only be a matter of time before distributions like Ubuntu are streamlined enough by manufacturers to deliver the same user experience as Windows.

The biggest factors, however, in the demise of the desktop operating system are the evolution toward web apps and the competing functionality of mobile devices. As high-speed Internet becomes ever-present, and many software applications are going online for ease of cross-platform compatibility, the ChromeBook or other thin-client operating systems will soon be able to offer most users all the computing capability they need. On the other hand, as phones become more powerful, most users might not even need a desktop altogether, and simply dock their phones into a kiosk with a larger monitor and keyboard for more workspace. Despite Microsoft’s gallant attempts at keeping the desktop relevant by radically changing the desktop experience with Windows 8, it is likely that they will not be able to stem the tide; the lure of free software is simply too strong.

Struck by a significantly decreased market strength and the desire to hold on to its remaining business market, a free Windows desktop OS could happen sooner than we expect. Just as the Pentagon has a detailed strategic response to every possible attack scenario, it is interesting if Microsoft has a similar analysis of the OS market, and how many of these carefully planned scenarios result in free, and possibly open source, software for all.