Augmented reality offers many exciting applications and the potential to change the way we interact with machines.  Throughout industries as diverse as gaming, healthcare, education, search, and advertising, augmented reality is poised to create breakthroughs in human-computer interaction (HCI) over the next five to ten years.

In a broad sense, augmented reality takes a real-time image of the world, adds computer-generated information to that image, and displays it back to the user.  Augmented reality apps can be as simple as advertising apps that recognize QR codes in posters and overlay links to additional content.  More complex apps can completely alter the displayed image, or add interactive 3D elements to the scene.

The primary hardware devices for augmented reality are smart phone, tablets, and head-mounted displays.  Higher-end smart phones and tablets can capture video, process that video in real-time to add computer-generated content, and display it back to the user.  As the user moves, interacts with the environment, or pushes input buttons on the phone, the displayed image can change.  Heads-up displays are a more advanced hardware device for fully immersive experiences.  Products such as Google Glass and the Oculus Rift can project images directly to the eye, bypassing the physical controls entirely, and enabling digital content overlaid over direct vision. 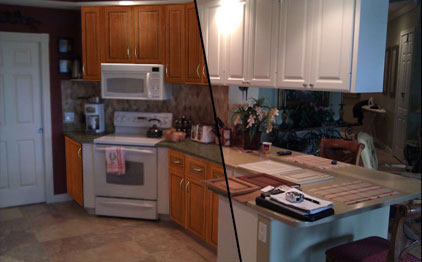 GPS-based apps are the simpler of the two, and primarily understand the environment based on the map coordinates of the phone, and the direction in which the phone is pointing.  By applying mathematical transforms to this information, the app can show markers or helpful information such as map directions overlaid on the screen.

Augmented reality applications are still in their early stages, and poised to make large strides in the coming years.  As the hardware technology advances with increased processing power and the proliferation of wearable devices, a new level of interaction will be possible in augmented reality software.  The industries most impacted by AR will likely be education, advertising, and gaming.  In education, wearable technology will be able to provide interactive instruction.  For instance, user manuals could become a thing of the past, as the IKEA furniture will digitally display the next assembly steps directly through wearable eyeglasses.  In advertising and sales, consumers will be able to virtually try on clothes without leaving their homes.  Games will bring interactive characters directly into player’s room.  With all the promise that augmented reality brings, and the large commercial incentive to make it happen, it’s only a short matter of time until these ideas become reality.